Is Radiation Impacting The Oceans Seven? 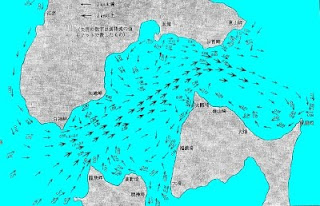 With interest in the Oceans Seven rising along with fears that the nuclear crisis in Fukushima, Japan is threatening the ecosystem of the Pacific Ocean, Open Water Source's Japanese-speaking staff investigated the possibility of channel swimmers getting harmed by radioactivity due to swimming in the Tsugaru Channel, one of the Oceans Seven challenges.

It appears that is zero risk of getting harmed by radioactivity in the Tsugaru Channel for a variety of reasons.

2. Water Flows. The prevailing currents flow between the Sea of Japan and the Pacific Ocean, far away from the ocean currents that flow from Fukushima Prefecture and points east of the Japanese archipelago. There is no realistic way for radiation to be carried by water to the Tsugaru Channel.

On the east coast of Japan, water flows from the north in Hokkaido southwards towards Fukushima along the Oyashio Current. From there the northeast-flowing Kuroshio Current runs across to Hawaii. Where the currents collide, there is a very rich fishing area. Unfortunately, this is right off the Fukushima coast where the fish contamination is taking place.

3. Radiation Survey. The Marine Biological Laboratory in Woods Hole did a ship-based survey in the Fukushima area. The experts will report their findings at a symposium next year. The MEXT data was last on August 2nd.

MEXT is monitoring radiation at around 40 points in the ocean off Fukushima, the most northerly sampling points being A1, A2 and A3. These are nowhere near the Tsugaru Channel. The locations of the measuring points are here with the latest data here.

Currents around Japan are posted here.

4. Dilution. The water-based radiation heading towards northern Hawaii is constantly diluting and decaying. The amount of radiation added to the Pacific Ocean is about the same as was added by the first Pacific bomb tests. The radiation load from the Pacific tests is still decaying, but are longer-lived isotopes, and the radiation load due to Fukushima will drop below the then-current Pacific test levels in about a year.

While some individuals may find different information and come to different conclusions, it appears that in 2013 there will be more radiation from atomic bomb tests 40 years ago, than from the recent Fukushima nuclear crisis, in the Pacific Ocean.

Information gathered with the assistance of Paul Hardy.

Note: Open Water Source's Japanese-speaking staff will conduct a special tour of the Tsugaru Channel in July 2012 where they will help organize travel, housing, pilots, escort boats and bilingual support crew for swimmers who wish to do solo and relay swims across the the Tsugaru Channel.

Copyright © 2011 by World Open Water Swimming Association
Posted by Steven Munatones at 4:43 AM No comments: