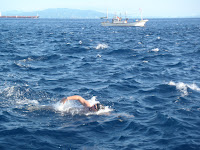 Bloodied from cuts on rocks and battered by many hours of constant turbulence, Darren Miller crossed the Tsugaru Channel in 15 hours 55 minutes.

Guided by Captain Mizushima's steady hand and constant navigation of the shifting currents, Miller completed his fifth of seven channels in his quest to achieve the Oceans Seven.

While the water temperature was comfortable, it was the infamous Tsugaru Current that churned up the waters for Miller. "I have never been in anything like that," said the Strait of Gibraltar, English Channel, Catalina Channel and Molokai Channel swimmer. "It was tough."

"When Darren missed the cape (on Hokkaido), I didn't think he would make it," commented his brother Matthew who was on the boat. "I know my brother is tough, but I was just being a realist, not a pessimist."

Miller was also buoyed by the support of Stephen Redmond who was watching via Miller's GPS tracker. "Just tell him to keep moving. But God is it tough to watch someone on GPS." If conditions hold, Redmond will start at 2:30 am at the same point Miller began.

Captain Mizushima is fueling the boat and hoping for some Irish luck this Tuesday morning in Japan.

Posted by Steven Munatones at 8:05 PM