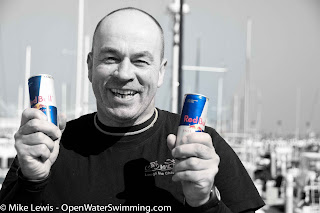 Today, Under the strangest and unlikeliest of circumstances in a far-away land, the remarkable Irishman Stephen RedmondTsugaru Channel in Japan to become the first person in history to achieve the Oceans Seven.

The 47-year-old former rugby player from Ireland entered the annals of marathon swimming history by completing the English Channel, North Channel, Strait of Gibraltar, Catalina Channel, Cook Strait, Molokai Channel (on his second try) and the Tsugaru Channel (on his fourth try).

An unlikely, but likable swimming star, Redmond proves that training, passion and commitment will take one far in the world of open water swimming when he completed the Tsugaru Channel in 12 hours 45 minutes. But he acknowledges all the help he received from family, friends and his community in Ballydehob.

On the northwest corner of Honshu in the sparsely populated prefecture of Aomori where there are no supermarkets or convenience stores that are found in the big cities of Japan, the diet of the local fishing community consists of entirely of food from the nearby sea. Faced with meals of shark brain, octopus, squid, raw fish, seaweed and clams, Redmond existed primarily on water with white bread and butter for the week leading up to his swim. But with a forced diet and a laser-focused mind, he endured a third aborted swim and was resigned to go home a failure.

He was truly a troubled man whose heavy heart was filled with worry. The light at the end of his Oceans Seven tunnel seemed to be extinguished. "I just can't go home. Too many people have supported me," he said repeatedly with heartfelt conviction and deep creases in his wrinkled brow. "I cannot fail. This [Tsugaru] Channel will be the death of me. You just don't know what this [failure] would do to me." On his last day in Japan, he packed his bags with a depression that was palpable. Zipping up his luggage, the end never seemed so near. His broad shoulders nearly seemed to sag to his waist; his eyes were pleading for mercy.

But the man of deep faith whose many supporters prayed feverishly for him in Ireland looked out once more at the Tsugaru Channel from his hotel room facing the previously angry sea.

And his prayers were answered.

The winds miraculously shifted from stiff easterlies to a gentle northwest direction. The seas were ironed out and unexpectedly tranquil. His hotel windows that has shook constantly for five days with winds whipping off the Tsugaru Channel was still and framed a welcoming view.

He called Noel Browne, his trainer and fellow training partner, wiping his eyes with disbelief and an unswerving faith in God and simply said, "Let's go." They immediately contacted Captain Mizushima, the top escort pilot in the Tsugaru Channel, who agreed that this was his last and best shot at history.

"It looks good," calmly said Captain Mizushima with a steely resolve of a tuna fisherman whose livelihood is made in the Sea of Japan and Tsugaru Channel. "I want to do this for you."

Captain Mizushima had prepared his boat and set up the swim streamer by 10 am. The crew set off with great haste. Redmond jumped off near the peninsula of Kodomari Benten Cape on the island of Honshu around noon and started sprinting the 30 km to Cape Shirakami on the island of Hokkaido.

Under favorable currents and calm conditions, the formula on his final and fourth attempt of the Tsugaru Channel was spot on. Despite having no linguistic ties or cultural commonalities with his skipper or crew, their bonds were tight. Body language replaced words. Communication with done visually through the eyes and emotionally though their hearts. With the group fully committed to success, the crew melded together...come hell or high water.

Fortunately, neither hell nor high water came. Redmond enjoyed a gentle northwest winds and mild Tsugaru Current throughout the afternoon and evening swim. Swimming straighter than ever thought possible from Honshu to Hokkaido, Redmond followed Captain Mizushima's swim streamer while changing his breathing pattern and picking up his arm stroke pace to swim faster. He swam like a man possessed, carrying the expectations of a nation, feeling the weight of obligations of his local community, and facing self-imposed pressure.

The hours went by in water that was comfortably warm for the man who trains primarily along the cold Irish coastline. 30 minutes swimming followed by a brief feeding stop. "How's my stroke?" he would ask Browne. A nod and an affirmation that things were good, and Redmond was off on another 30-minute burst of inexplicable speed.

Far away from home in a land where English is neither spoken nor understood, where the food is from the sea...Stephen Redmond succeeded to become the first person to achieve the Oceans Seven.

The Strait of Gibraltar and the Catalina Channel were a one-shot deal for the famed Irish swimmer, but the Tsugaru defeated him three times. He conquered the notorious North Channel and Fastnet in Ireland, and had to make two attempts at the Molokai Channel in Hawaii and the Cook Strait was terribly difficult, but the Tsugaru has taken four attempts to overcome.

Swimming faster than he ever has before, this crossing took everything he had. "A faster stroke and kick made all the difference. It was a huge gamble. I did not know if I could stick to the pace, but I enjoyed it." His 12 hour 45 minute effort will be the pinnacle of Redmond's remarkable career.

He is a common man with an uncommon vision; an ordinary man doing extraordinary things. A man with dream that was envisioned and ultimately executed.

Stephen Redmond has etched his name in history.

Redmond has completed the following 7 channels of the Oceans Seven:


Posted by Steven Munatones at 8:08 PM