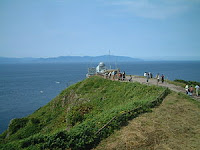 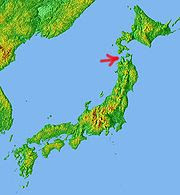 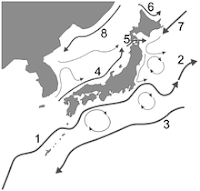 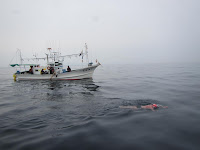 The Tsugaru Channel is the least known of the 7 channels that make up the Oceans Seven.

The channel is in a far-away land where Japanese is the only local language spoken - presenting additional challenges for non-Japanese marathon swimmers.

The Japanese escort boat pilots are experienced fishermen in the area, many of whom have spent their entire lives fishing among the well-stocked area of myriad marine life.

Additionally, the channel presents many of the same challenges as the other more well-known waterways of the Oceans Seven: strong currents, tidal flows, unpredictable eddies, unswimmable waters when the winds come up, jellyfish, squid, large ocean swells, and large oil tankers and cargo ships running the channel.

The recommended time to attempt crossings is July and August, although some have attempted in May and June when the water is still closer to 10°C (50°F) than 15°C (59°F), but in July and August, the water temperature increases well above 16°C (61°F).

The distance between the two closest points is Tappi Misaki (竜飛崎) on the Honshu (south) side of the channel and Shirakami Misaki (白神岬) on the Hokkaido (north) side in 19.5 km (12 miles).

Note: "misaki" means "cape" in English. However, many of the successful solo and relay crossings follow the course pioneered by David Yudovin in 1990.

Yudovin started on the far western side of the channel on a small cape called Kodomari Benten Cape (小泊権現崎) on Honshu and allowed the west-to-east running Tsugaru Current to push him towards Shirakami Misaki on the Hokkaido. His pioneering swim took him 13 hours 10 minutes in July 1990.

An alternative course is to swim directly between Tappi Misaki on Honshu to Shirakami Misaki along the Shirakami Peninsula on Hokkaido. This course is a bit more high-risk in that the currents around Tappi Misaki run fast, but if the swimmer is fast enough, the distance is shorter. This course was taken by Steven Munatones a few weeks after Yudovin's swim in 6 hours 11 minutes in July 1990.

The shortest course in the reverse direction (north-to-south) is from Shirakami Misaki to Tappi Misaki that was pioneered by Munatones in 1990 in 6 hours 39 minutes.

Another course is between Shirakami Misaki on Hokkaido and Shimokita Peninsula (下北半島) on the eastern side of Honshu. This course was pioneered by Miyuki Fujita in 2006 and swum by Penny Palfrey in 14 hours 26 minutes in 2011.

The currents flow quickly from west to east as the water flows from the Sea of Japan to the Pacific Ocean.

The challenges include issues both on land for planning and logistics purposes and in the water. The fact that English and languages other than Japanese are not spoken in area is an obstacle not a problem in the Cook Strait, Strait of Gibraltar, North Channel, Molokai Channel, English Channel or Catalina Channel. In the water, swimmers are often swept long distances due to the extraordinarily strong currents flowing from the Sea of Japan to the Pacific Ocean and can face large blooms of squid during the night. Swimmers are challenged by occasional patches of cold water that flow up from the depths that have even chilled such marathon swimming stalwarts as Stephen Redmond.

American Darren Miller shows his environment as he prepares for his Tsugaru Channel attempt this week. Miyuki Fujita, the most prolific Japanese channel swimmer, shows the usual conditions in the Tsugaru Channel below.

Besides Miller, Ireland's Stephen Redmond, Sweden's Anna-Carin Nordin and Americans Pat Gallant-Charete, Forrest Nelson and Michelle Macy will make attempts across the only Oceans Seven challenge in the Far East as well as relays from Japan and elsewhere.

Open Water Source will be following Miller and Redmond are their swims across the Tsugaru Channel this week.

Posted by Steven Munatones at 8:07 PM