It Takes A Team And All Day 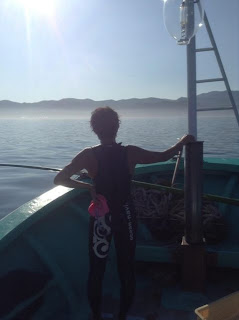 13 hours 41 minutes after starting on Kodomari Cape on the main Japanese island of Honshu, Team Ocean-navi's 4-person relay finished on Shirakami Misaki on the northern island of Hokkaido.

Patiently following one another hour after hour, the quartet never lost confidence that they would finish. It was only a matter of time given the generally calm conditions. Slowly but surely they made their way across the tricky channel, sometimes caught in eddies and pushed in unexpected directions.

Starting out before the sun rose, it took all day. And it was well worth the effort.

Posted by Steven Munatones at 12:16 PM