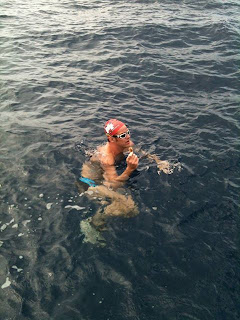 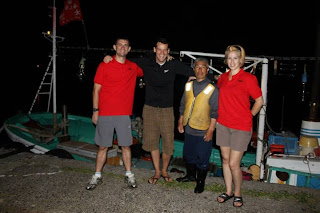 Adam Walker became the first British male to complete a crossing of the 19.7 km Tsugaru Channel in Japan with today's 15 hour 31 minute traverse from Honshu to Hokkaido.

Walker has now completed 5 of the 7 channels of the Oceans Seven: English Channel, Strait of Gibraltar, Molokai Channel, Catalina Channel, and now the Tsugaru Channel.

Mad Adam, as he is alternatively known, was escorted by Captain Mizushima who had to fight adverse currents most of the way. "After 10 hours, he was tired of course, but he kept on fighting with the waves and current. But he was patient and looked strong throughout."

"I must be honest, this swim was the hardest to date. I had to do regular sprints like interval training all the way across when given the signal from the pilot and the waves were relentless. At one stage the ways were so bad I could barely swim and was just ducking under them for an hour and a half. Even at the end when I had a mile to go it pushed me back to 2 miles. Then I had 1 mile to go and it pushed me sideways before letting me in.

I had two separate occasions when a shark swam underneath me but still have all limbs so all good
."

And now he remains on track to become the first British man to complete the Oceans Seven.

Posted by Steven Munatones at 10:23 AM