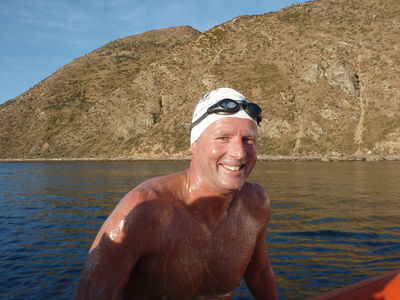 In addition to the dozens of native Japanese masters swimmers who will attempt to cross the Tsugaru Channel this summer, several Oceans Seven channel swimmers from overseas will also make the attempt to cross from Honshu to Hokkaido in northern Japan.

"Each of the foreign swimmers and the relays will be escorted by Captain Mizushima," explains Masayuki Moriya of Ocean Navi and the Tsugaru Channel Swimming Association.

Although the straight-line distance across the channel is less than 20 km, swimmers have an option to take the more risky straight-line tangent or a more curvaceous route where the swimmers attempt to slingshot their way across the channel riding along the Tsugaru Current. "It is a longer course, but more conservative without the speed demands of the Tappi Misaki course," says Moriya.

"Swimmers can take the Kodomari Route pioneered by David Yudovin in 1990 where they start at Kodomari fishing port on Aomori Prefecture," explains Steven Munatones who also crossed in 1990. "Or they can take the Tappi Misaki Route that has a much lower success percentage, but a shorter distance.

Whether swimmers take the more conservative Kodomari Route where the Tsugaru Current pushes the swimmer towards Hokkaido or the higher risk Tappi Misaki Route where the swimmers have to fight against some strong lateral currents, Captain Mizushima will aim towards Hokkaido's Shirakami Misaki. Either way - curvaceous or straight - there are very high probabilities that the swimmers are going to hit challenging eddies towards the end as they approach Hokkaido. This tidal, current and wind information comes directly from the engineers who built the Seikan Tunnel that runs directly below the Tappi Misaki Route.

Posted by Steven Munatones at 3:30 PM