In his younger days, Toshio Tominaga (富永俊夫 in Japanese) played water polo and swam in school. He was competitive, but then he began his professional career at a Japanese electronics corporation.

As the intervening decades passed, Tominaga stayed in good shape, but he had to dramatically reduce the number of hours that he trained in a pool.

But after retirement at the age of 62, Tominaga took to the oceans surrounding Japan and started to make up for lost time.

For years, he did numerous ocean swims from Okinawa in southern Japan and occasionally traveled overseas to swim in the Bosphorus Strait in Turkey (2009) and the English Channel crossing (2013). But the most difficult ocean swim in Japan, the Tsugaru Channel, was in his sights. He trained and trained and got himself physically and mentally prepared. He studied the logistics and different strategies of crossing the technically difficult channel. 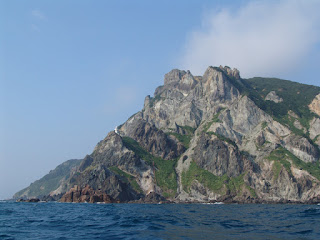 "Tominaga-san had marvelous conditions as he started from Gongenzaki Cape on Aomori Prefecture [shown on left] on the main Japanese island of Honshu," explained Steven Munatones. "With Captain Mizushima at the helm, he started much later than other Tsugaru Channel swimmers, entering the water after 7 am."

Then he started to head north towards Hokkaido with a slight bearing just west of his goal. On his main escort boat, Captain Mizushima continued to adjust his course based on the strength of the currents and wind. On his secondary boat to his left, his 67-year-old wife Yukiko cheered him on.

"Imagine looking at the palm of your hand with your thumb outstretched. The ideal start is at the tip of your thumb and you are heading for the tip of your forefinger," explained Munatones who crossed in both directions in 1990. "Due to the tidal flows caused by the difference in water levels between the Sea of Japan and the Pacific Ocean, the Tsugaru Current is swift and always pushes swimmers eastward. Plus, channel swimmers nearly always have to deal with giant swirling eddies that are caused by the topography and shoreline of Hokkaido as they approach their goal."

But Tominaga was lucky.

He was able to swim on nearly a straight shot between his start on Gongenzaki Cape to the town of Fukushima on the southernmost part of Hokkaido, taking only 9 hours 58 minutes to cross.

"His time was the seventh fastest in history. He kept up his stroke and maintained a great pace throughout his crossing. Without a doubt, it was a remarkable swim for anyone, but is especially great to see a swimmer his age take on this challenge. His time reflected his preparations, his navigational strategy, and the generous conditions offered by Mother Nature."

Photo and video courtesy of Masayuki Moriya of Ocean Navi.

Posted by Steven Munatones at 7:53 AM No comments: 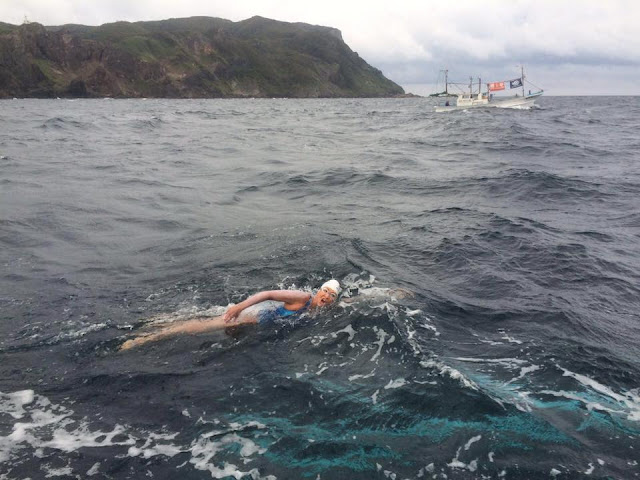 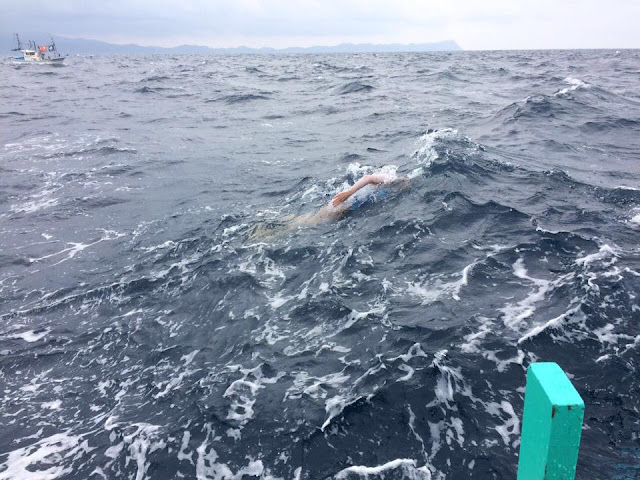 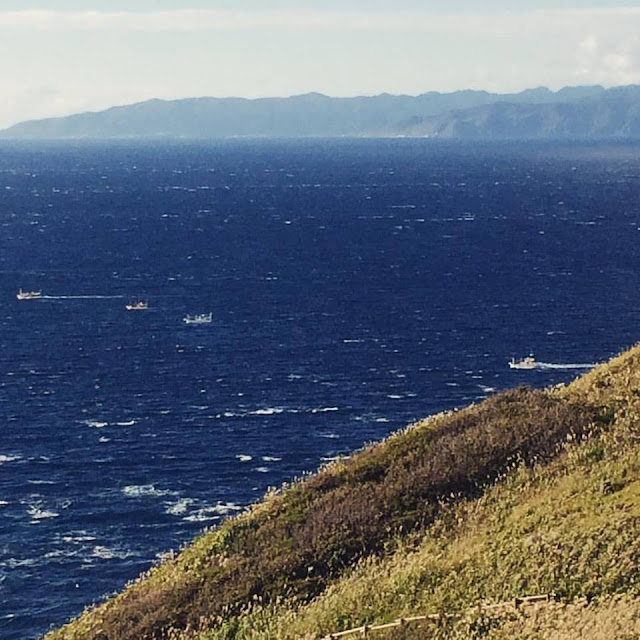 Mariel Hawley Dávila knew the risk of attempting a crossing of the Tsugaru Channel that sits between the Sea of Japan and the Pacific Ocean. Her crew, including Nora Tolendo Cadena and Gela Limonchi Gomez, knew the risk due to strong winds, waves and the tides.

But with the escort pilot's recommendations, they talked and decided to give it a go given the weather predictions.

"I started to swim [from Honshu] against a lot of waves and wind, but I swam with peace and faith that everything would be fine. As the hours went by, the wind increased its strength and the swells became more complicated. I tried to swim flowing with the waves; however, at 5 hours, my coach Nora decided to suspend the swim thinking about my safety."

Posted by Steven Munatones at 5:53 PM No comments: