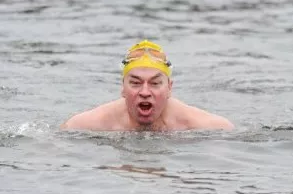 His last crossing of the Tsugaru Channel in northern Japan was legendary - coming after three consecutive failed attempts - and was the subject of a documentary film funded by Red Bull Media House, Defeating Oceans Seven.

Listen to his interview on the Hard As Nails podcast here where he shares his experiences before and during his channel swims. "His swims were absolutely epic. I remember when he flew from Europe to Los Angeles and then went directly from LAX Airport to his escort boat - and then traveled to Catalina Island in rough water and without sleep - and then jumped in the water and swam for 12 hours 39 minutes while sick and sleep-deprived. Then then he crawls up on the California shoreline, hustles back to the hotel thoroughly beaten and then he starts to make hotel and airplane reservations to Hawaii. All within 24 hours. This is typical of Stephen: gritty, committed, hardened," recalled Steven Munatones.

Redmond explains his four attempts of the Tsugaru Channel, "...the weather tried to kill us...every time."

Hard As Nails is a weekly podcast produced by Outsider.ie where some of the most hardcore people on the planet to find out what makes them tick and how they keep on going as they take on epic challenges.

Posted by Steven Munatones at 2:36 PM No comments: