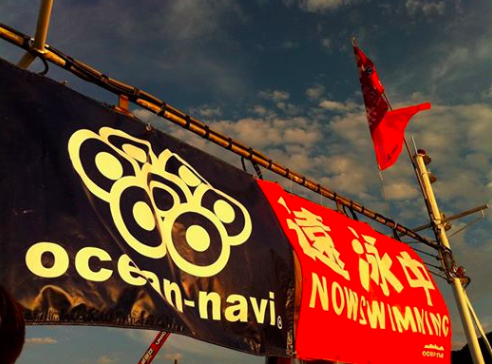 After getting a taste of crossing the 19.5 km Tsugaru Channel on a six-person relay with Team Yajyu (チーム野獣 in Japanese or Team Beast in English) in July 2016, Tomonari Ogino started to think about a solo crossing.

Almost two years to the day, Ogino's dream was realized.

Ogino started late at night (11:43 pm) on the Aomori Prefecture side of the Tsugaru Channel in 21°C water and walked upon the Hokkaido shore at 11:48 am the next day after swimming the second half of the channel in 18°C water. His 12 hour 5 minute 50 second swim was his first major channel crossing.

His success was a long time coming - and not anticipated, at least initially.

"I had swum for about 8 years 5 times per week. I was not [initially[ aiming to cross the Tsugaru Channel, but it was simply to have fun swimming because I liked it. I didn't do much long-distance training for a swim like Tsugaru, but I did not have anxiety and swam with great confidence because I had been swimming for 8 years and I was able to get a start window. I was coached by Ocean Navi coach Masayuki Moriya and all my friends who practice together every morning. I swam so that I could repay everyone's thoughts and support.

I took on the swim in order to learn how to have a heart of gratitude. I try to not forget that feeling in my daily life.

In our meeting on the previous day, I understood that there may be tidal flow until 5 am at dawn, but after that, the tide will become weak, and it is only about noon that the tide on the Hokkaido side would become strong.

In the beginning, the water temperature was warm and I encountered jellyfish. I was moving down the cape twice at right angles. [The current was so fast that when] a bottle of supplies was thrown in front of the escort boat, in a moment, they were floating behind the boat.

We're going through the tide around the 9 km mark. I was told that I have 5 km left and to swim faster on the right side of the boat. While I was looking at the lighthouse [on land] diagonally on my right, I swam in the horizontal direction against the tide. But the captain was able to pick up the best course. I had a lot of fun making all the pieces work together.

The water temperature dropped rapidly [near Hokkaido] in the area where the tide flows. It said 18°C on the thermometer, but it felt about 14°C. Finally, I was able to touch the black rock on the right side of the lighthouse on Cape Shirakami and hear the [finish] horn on July 19th.

I wanted to go back to the boat and thank everyone, but I had a sore throat due to the seawater and I don't look good in tears. And I don't even have a voice with cold and fatigue

Posted by Steven Munatones at 2:58 PM