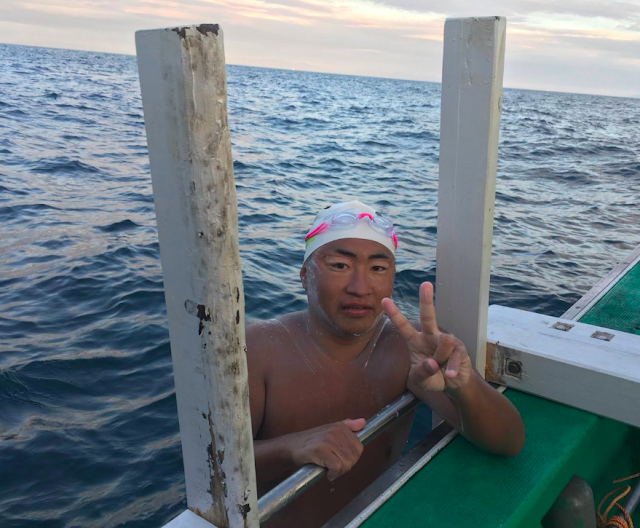 Japanese swimmer Masaki Sugita completed a crossing of the Tsugaru Channel on August 19th after 13 hours 18 minutes 43 seconds following the Kodomari Route that was pioneered by David Yudovin in 1990. He started in the early morning at 4:35 am in 22°C water under the guidance of Captain Harumitsu Ito and observer Ami Morioka who is now 2 for 2 on his escorted swims.

Videos of his swim are posted at the Channel Swim Japan Facebook page here.

Posted by Steven Munatones at 6:09 AM No comments: 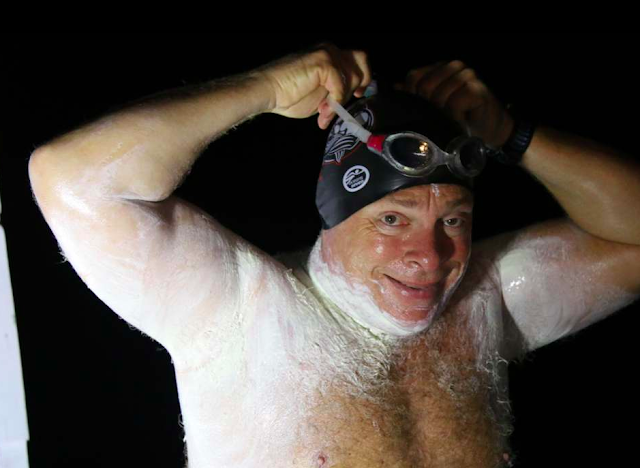 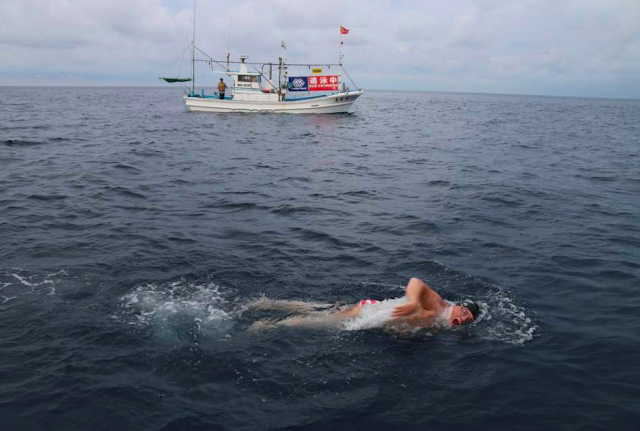 A day after his original escort pilot Captain Mizushima inexplicably ran the primary Tsugaru Channel escort boat on rocks near the start and was hospitalized as a result [along with swimmer Nathalie Luisa], Mortensen had to adjust to a new pilot.

But the 54-year-old Australian, nicknamed Sea Bull, shook off the unexpected and quickly got his job done, completing the 19.5 km crossing in 9 hours 34 minutes.

He wrote, "Heartfelt thanks to my incredible crew with beautiful family Lisa and Angelique managing feeds and number one cheerleaders, observer Mika [Tokairin] and Captain Ito who was outstanding with his trusty fishing tawler called Daigo Taisei-maru. Nick and Lachie holding the fort back home but there in spirit. 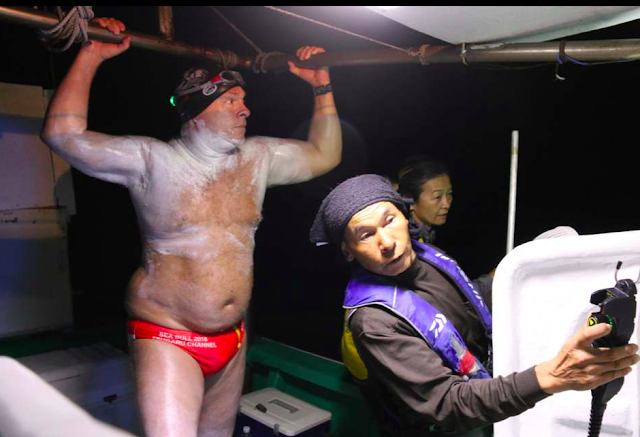 We loaded up at Port Tappi, then Captain Ito motored us in the still night for an hour to the start line. It was a no fuss, no frills team, but everyone excited for what lay ahead.

Start time was 10:31 pm. The night was black as a raven in a starless sky. There is something quite eerie diving from the back of a trawler into the black ink water being guided by only a spot light and swimming alone to the sheer cliffs of Gogenzaki on Honshu to start the swim. Sensory overload. Visibility is limited with auditory and touch senses going into overdrive, coupled with a dash of anxiety. Just you and the soulless black water swirling and surging around the cliff face.

The faint sound of the air horn is heard to signify the start of the swim. Touch the cliff and the splash begins. The sense of trepidation swimming from the base of the cliffs with water sucking in and out doesn't ease until back alongside the trawler with the A team support crew.

The Tsugaru swim is unique. Attached to a fishing rod at the front of the trawler is a long white ribbon [swim streamer] which sits 6 or so feet below the water surface for the swimmer to follow. A convenient guide especially in the dark, but I was tired of the cat and mouse chasing that bloody thing. 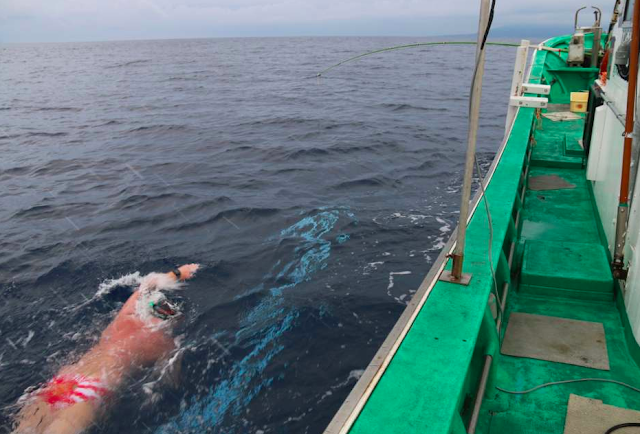 No adventures with marine life on this swim. Think I've had my fair share of late! Though Angie and Lisa filmed a school of jumping tuna who knew to stay out of reach given my being partial to sashimi.

The strong currents on this swim are everything they say they and more. About 1/4 way in during the night a strong westerly current kicked in. I had to swim parallel west for sometime so as not to be swept east and miss our target finish. Captain Ito skillfully navagated and directed me through this tough patch to stay on course. I was sick of seeing the lights of Honshu everytime I breathed left. After finally braking the Tsugaru Current, I dug deep to get to the other side as quickly as possible, trying to beat any other currents that lay ahead.

It was an exhilarating swim to the finish being the lighthouse at Shirakami-misaki on Hokkaido. No trepidation swimming the last couple of 100 meters to the shore - slowed it right down to take it all in and enjoy the moment. Big school of fish greeted me close to shore.

Touch the rock on the shoreline and thrilled that Angie jumped in and swam back to the boat with me - only 9 years old, but already a strong swimmer - had to work to keep up with her. So thankful to the crew and good luck charms Lisa and Angie with Lisa not taking her eyes off me and keeping me well fed through the swim.

Another amazing swim to be part of - such a privilege to splash in these waters for number 6 of the Oceans Seven.

A massive shout out and thanks for all the well wishes and messages of support from friends around the world and the swimming crew back home in Brisvegas with Anna our resident home reporter - very humbling - greatly appreciated one & all.

Posted by Steven Munatones at 4:00 PM No comments: 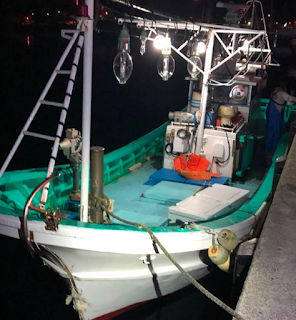 Back in 2013, Adam Walker had a bruiser of a battle across the Tsugaru Channel when he took 15 hours 31 minutes to cross in very turbulent water.

But last night, Walker had another experience on the Tsugaru Channel that was rougher and much more unexpected. Walker served as a member of Nathalie Luisa's escort crew along with Nathalie's father, coach Joshua Neloh, translator/observer Mika Tokairin and escort pilot Captain Mizushima who has escorted many swimmers and relays across the channel and fished in its waters as his primary job.

Walker wrote, "I can’t believe I’m writing this...the swim didn’t go ahead for Nathalie as the boat crashed into rocks on route to the start.

Everyone is ok, if not slightly bruised and in shock.

Nathalie banged her side and has rib pain so we need to check her out tomorrow. The pilot was unconscious for a few minutes, but fortunately I was able to wake him up. He has gone off in an ambulance, he hurt his collar bone and has gone to hospital!! The boat had to be towed. Of course, the swim is cancelled and of course very disappointed for Nathalie Luisa

Update: Nathalie ribs were x-rayed in Japan and shows a bad bruised, but no break. The pilot has a broken collarbone and will undergo surgery in a few days. The Tsugaru Channel Swimming Association and Ocean Navi is reviewing its current safety protocols with changes anticipated to be made.


Posted by Steven Munatones at 4:00 PM No comments: 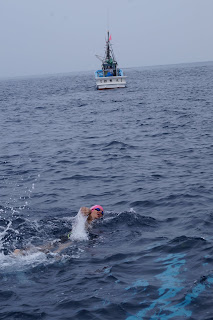 On July 20th, Aleisha Riboldi from Australia, Lisa Batey from the USA, and Youri Lavoine from France completed a three-person relay across the Tsugaru Channel.

Similar to starts in the Catalina Channel, escort pilot Captain Mizushima has been starting swimmers near midnight, requiring the channel swimmers in the Far East to swim through the night.

Observer Masayuki Moriya said, "They started at 11:30 pm in the 22°C water near Honshu and finished at 5:59 pm the next day in slightly cooler (18°C) waters near Hokkaido for a total time of 18 hours 29 minutes 42 seconds in a fairly calm crossing, but they were slowed by the Tsugaru Current."

Posted by Steven Munatones at 4:41 AM No comments: