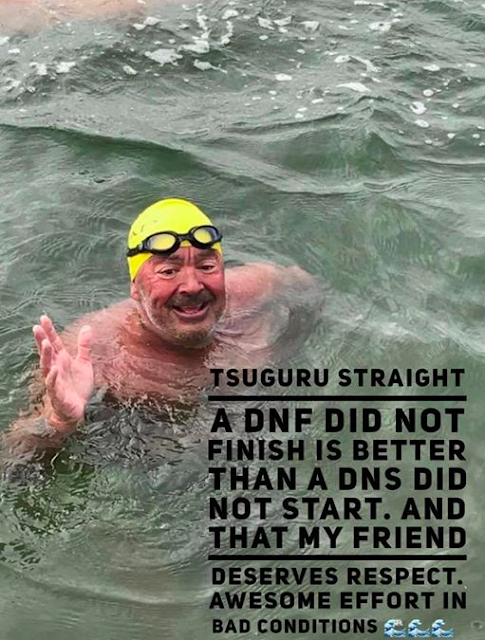 As with his other swims, he traveled to northern Japan with his son Daniel to take another shot at his fifth Oceans Seven channel, the Tsugaru Channel between Honshu and Hokkaido. As the weather patterns remained grumpy, Summers' window started to get shorter and shorter. On the second-to-last day, he reported, "The swim has been cancelled due to strong winds [that are] forecast to get stronger. [It is now the] last day of the window and sudden death for my Tsugaru chances." 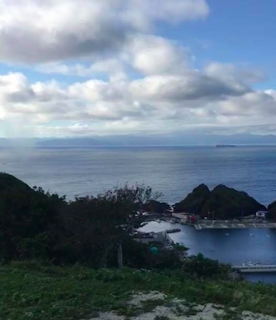 With the winds howling, Summers and his escort pilot Ito decided to take the shortest route across the Tsugaru Channel: the 19.5 km Tappi Misaki Route. "It is the shortest possible course in terms of distance - as opposed to the longer and more conservative Kodomari Route. Off in the distance, Hokkaido usually looks so close, but it also carries significant risk because the Tsugaru Current usually whips right through the course and can push swimmers well off the straight-line tangent," explains Steven Munatones.

When it was all over, Summers wrote, "I need to take responsibility for the DNF on this Tsuguru attempt. After the window closed today, I encouraged the pilot and organizers to have shot at a daytime start and night finish. The winds and current were atrocious, but it was on me. I enjoyed the 54 km roller coaster with Daniel, Yusuke Shimasaki and pilot Ito-san."

The 58-year-old describes in depth his challenge:

Daily News of Open Water Swimming: When you first saw the Tsugaru Channel standing on top of Tappi Misaki and looking over to Hokkaido, what was your immediate reaction?

Dean Summers: I couldn’t actually see Hokkaido as it was always covered in clouds, but I could see the swirling water. I think they call it the dragon's tail that extends from Tappi Port towards the northwest. It’s where the current meets the wind and tide and is an ominous warning of what awaits us swimmers.

Daily News of Open Water Swimming: When you first walked into the water (somewhere around Tappi Misaki?) in the days leading up to your attempt, what was your first impression?

Dean Summers: For me, water has a particular texture and feel. It is hard to explain, but I’m sure swimmers understand. The water was warm, clear, soft and inviting. The beaches, however, are badly littered with plastics and fishing boat flotsam.

Daily News of Open Water Swimming: The water looks clear in the Tsugaru Channel, but you swam when it was very choppy and turbulent. What was it like swimming in that washing machine?

Dean Summers: I can find a rhythm in any conditions, but I did take me an hour or two to relax and establish one in this swim. Water was still clear and I know now that there were strong currents in all directions. If you don’t have reference points, it’s hard to feel the current. Rough is always OK with me, but it’s those bloody currents that take their toll.

Daily News of Open Water Swimming: The eddies in the Tsugaru Channel are notoriously difficult to swim through, especially as you get closer to Hokkaido. Did you swim into any eddies?

Dean Summers: My son Daniel was the support crew and reported seeing two distinct eddies where white caps were coming for every direction. In the water, the effect is exaggerated and it seemed the sea was whipped into peaking with sharp high waves. These lifted me and toss me around which was a fun distraction. They took 10 minutes to get through with no problems.

Daily News of Open Water Swimming: Did you see any marine life?

Dean Summers: I saw two lazy sea snakes in my first attempt [July 9th) and not much else. This time [August 31st), I was joined by a large school of tuna which swam all around me for a while trying to work out what I was and then after a few moments, swam off. They returned to keep me company three times and then got bored and left. A few jellyfish and not much else.

Daily News of Open Water Swimming: The wind really kicks up in the Tsugaru Channel as it blows between Honshu and Hokkaido. How were the wind conditions during your time there in northern Japan?

Dean Summers: Yes, I think the mountains on either side create a funnel effect and blow strongly. My original swim was to be the day before, but the winds were blowing in excess of 35 knots and gusting over 40 so it was unsafe for the boat. I convinced Captain Ito to leave the next day at 11 am as it was my last chance to swim. Winds were about 20+ knots and gusting. He saw that I was comfortable so we all relaxed.

Daily News of Open Water Swimming: During your Tsugaru Channel attempt, when (time) and why did you decide to call the swim?

Dean Summers: I didn’t call this swim. I now understand the trajectory of my course and that it was doomed once the currents didn’t relent on the Hokkaido side. At the time though, I thought I was close to the beach and was told to dig deep for 1 kilometer to push through the northsouth current and get into the lee of the mountains.

Believe me, I pushed hard and was happy to have heaps of strength and stamina left in my arms. Unfortunately, the cavalry did arrive and the current just pushed me back relentlessly until the organizer told me that I had swam 54 km and we were going backwards. I protested and said I can swim another 54 km, just find me a way into land.

They were right and always have a clearer perspective and a higher safety priority than the swimmers. After another hour and falling further south and east, I agreed reluctantly to surrender. This after 9 hours 44 minutes at 8:45 pm.

Daily News of Open Water Swimming: Even before you entered the water, you knew that the attempt was going to be tough. What was your mindframe before the start of the swim?

Dean Summers: It was a last-minute suggestion to have Yusuke request a day start and night finish with the pilot. I knew they weren’t overly excited, but the option for me was to go home dry with 20% of the costs in my pocket.

My philosophy is that you can only start any kind swim if you have your head in the right space. I was with Daniel and we are very close so I was full of confidence and happy to have a shot. I was 100% focused on success and keeping everyone happy on board.

In horse racing, they say make every post a winner and so I applied that thinking. Every wave I imagined was helping, every gust of wind, surge of current and change of tide was helping me get to the other side. I was wrong, of course, but we had a great journey. I often visualize negative thought and so acknowledge them and move on quickly.

Daily News of Open Water Swimming: A swim streamer is used during Tsugaru Channel swims. Were you able to see the swim streamer (even) in the rough water conditions?

Dean Summers: Tsugaru is the only swim that uses the streamer. Most of the time, it’s helpful and quiet, beautiful to watch it wave a flutter in the water. Other times, a cross current will draw it under the boat and alert you to the horrible effects of those conditions. I could see it all of the time and even at night. It helped me keep a safe distance from the boat when it got very rough.

Daily News of Open Water Swimming: What would it have taken for you to complete the crossing on the day that you tried?

Dean Summers: As mentioned, I wanted to keep going and told the pilot that I could swim all day and night. He believed me, but when the time came I think it was impractical. In hindsight, another 12 hours later would have been perfect, but the boat wasn’t available then. I can't imaging a time that I would voluntarily quit a swim except for obvious safety reason or if I had not trained properly.


Posted by Steven Munatones at 12:03 AM No comments: