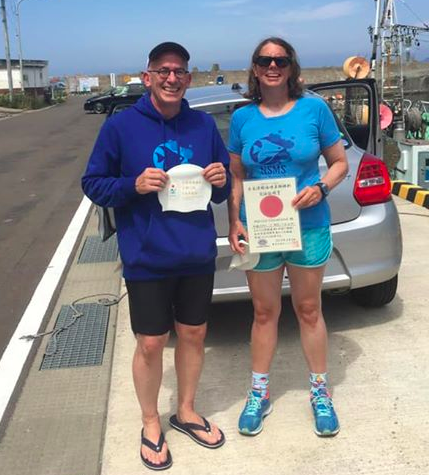 Marcia Cleveland wrote Dover Solo, a widely-read, popular book about her 9 hour 44 minute English Channel crossing in 1994 at the age of 30. Dial forward 25 years and the 54-year-old Cleveland is still swimming channels around the world...and greatly enjoying herself doing it.

Today, she completed a 10 hour 11 minute tough crossing of the 19.5 km Tsugaru Channel from Honshu to Hokkaido in northern Japan.

She described the crossing that started at 4:53 am and finished at 6:33 pm, "The last seven hours, I was in a washing machine with 4-5 foot waves sometimes crashing over me. It was a tough swim and I made it. I earned this one today, although I couldn’t have done it without Ted Baumgartner [shown above] in oh so many ways."

Her Japanese hosts from Ocean Navi were happy for her success. "Marcia visited Ocean Navi in Shinagawa [Tokyo]; many know her as a dynamic swimmer. We told her during the swim another swimmer [from Croatia] completed a magnificent swim. Marcia said she was very happy for Dina and [as a result after receiving the news], she became even more powerful. She is not only a great swimmer, but also is a lovely person."